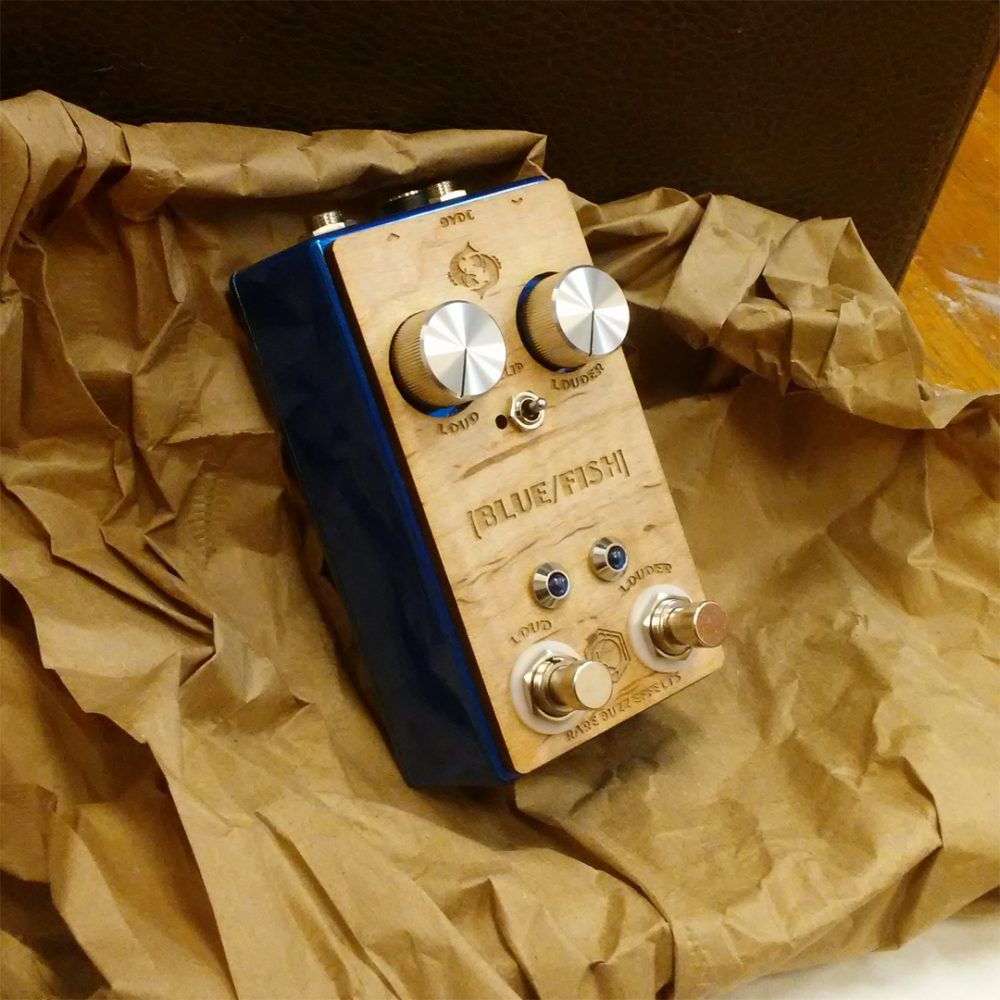 For anyone who follows our account on Instagram, the [blue/fish] may seem like old news. I’ve been working with Jason Allwood of Central Blues Co. to develop this pedal for months, and after numerous prototyping rounds, we’re ready to begin our first production run. I thought I’d take a breath after a hectic weekend in pedal-world to formally introduce the [blue/fish] and give you a rundown of what to expect.

The [blue/fish] Dual Boost offers two unique boost channels – Loud and Louder – that can be used individually, or can be stacked together. Each features its own passive volume control, and there is an optional clipping section which follows the Louder channel. The Loud channel adds some warmth to your tone, while the Louder channel is a clean boost that is more apt to break up – in a good way.

Like other pedals in the [fish] Series, the [blue/fish] features a solid curly maple faceplate, cut and etched by our friends at Griffen Hollow Studio. Large aluminum knobs control the channel volumes, and top-mounted Lumberg audio and DC jacks are used. The [blue/fish] footprint measures 2.61″ x 4.78″ and is roughly 2″ tall. The [blue/fish] is true bypass, with each channel being controlled by an independent 3PDT footswitch.

Digging in Deeper: What the [blue/fish] Does

The [blue/fish] will be offered in two configurations, distinguished by enclosure color and clipping options. The standard [blue/fish] ($114.99), housed in a candy blue enclosure as pictured here, will feature germanium clipping and MOSFET clipping. The premium [blue/fish] ($134.99), housed in a satin black enclosure, will feature the same germanium clipping but substitutes a Nanolog N3 for the MOSFET. These clipping options are controlled with a three-way mini toggle switch mounted between the volume knobs.

The [blue/fish] was developed for electric blues guitar, but we have found it to be equally at home on acoustic – particularly the Loud channel. It pairs well with other effects, particularly overdrive and light modulation.

Finally, we have partnered with Barefoot Buttons to offer a set of their new mini stopswitch covers. This set of two, including one plain and one with the Rare Buzz NPN logo, will be offered for $14.99.

A huge thank you to Nashville’s own Jenny Teator for taking the [blue/fish] for a test drive. Jenny has the standard model, and is playing it with in the Clipping Bypassed position. If you are interested in the [blue/fish] Dual Boost, they should be available in mid to late July to coincide with Summer NAMM in Nashville. If you will be at NAMM, find the [blue/fish] at the Stompbox Booth, hosted by Big Ear Pedals and take it for a spin yourself! We do have a waiting list started – feel free to contact us if you would like to add your name.

Shitty pedals for below average guitarists.
Or is it other way around?