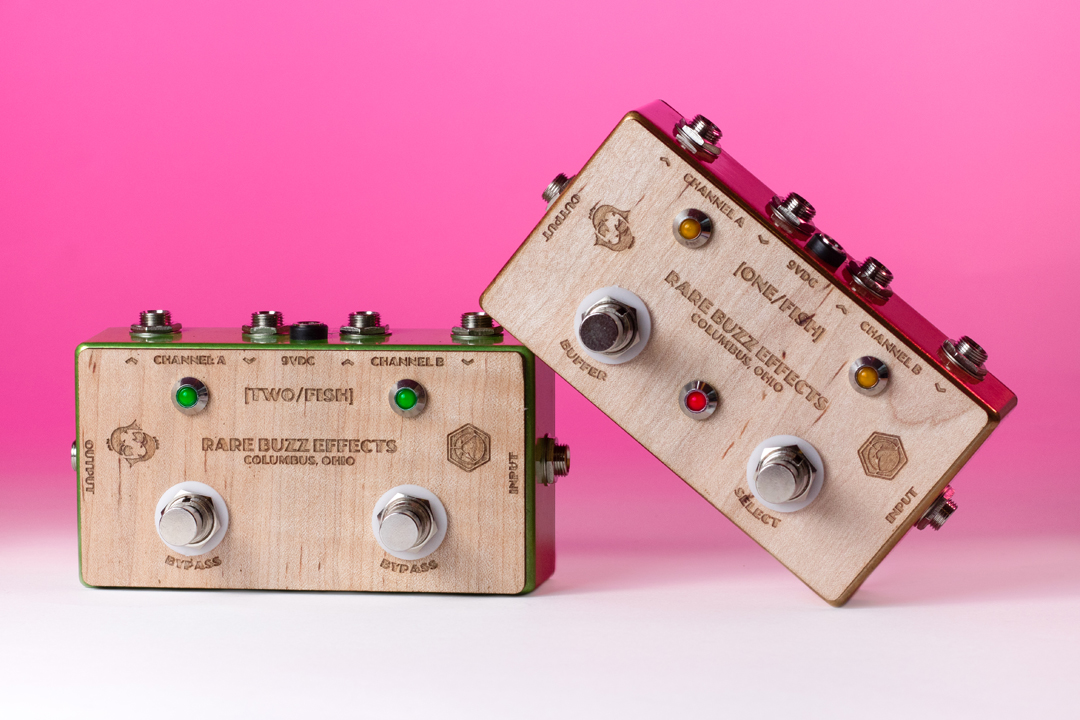 Earlier this month, we introduced two new utility pedals at Rare Buzz Effects. These are the first pedals from our Fish Series of utility pedals, with several more planned for later in the year. Featuring high quality parts and a unique look, they add a little sexy to the boring pedals on your board. I refer to these two as “the twins” because they are very similar – both feature two effects loops followed by a Klon-style buffer. However, it’s what makes them different that will help you decide which will work the best for your application.

All pedals in our Fish Series share one unique feature – a solid curly maple hardwood faceplate made in a partnership with our friends at Griffen Hollow Studio in Columbus, Ohio. We worked with the team at GHS to develop a beautiful, durable look that will stand out on a pedalboard. Paired with translucent powder coat finishes and matching lighting, these pedals have a distinctive 1970s feel. We think you’ll dig them!

The [one/fish] Comparator is a switching circuit that I developed to A/B test pedals during development, but soon realized it could give gigging musicians the ability to flip-flop between pedal chains. With the [one/fish], one channel is always active – either Channel A or Channel B. Use this to switch between pedals used for soloing and those used for rhythm, or for guitar changes that require different pedals. The switching circuit is followed by an active buffer, which is also switchable via a true-bypass switch. Since the buffer follows the effects loops, the [one/fish] doesn’t have an adverse effect on buffer-sensitive pedals like classic fuzz and wah.

An unintended, but useful feature of the [one/fish] is that it can be used without a power supply. The switching still works, but the buffer does not – however, when the buffer is activated it acts as a kill switch. Keep in mind that without power, there also won’t be any indicator lights.

The [two/fish] Dual Loop is a more traditional effects loop switcher. Each channel can be switched on independently, with Channel A following Channel B in the overall signal chain. Like the [one/fish], there is a Klon-style buffer that follows both loops, however in this version the buffer is always on. This pedal can be used anywhere a player would have a traditional effects loop, or to group certain pedals together – stomp on one switch instead of dancing on the pedalboard.

Unlike the [one/fish], the [two/fish] needs power to pass the signal since the buffer is always on. Power requirements for either pedal are quite low, and they can easily be daisy-chained in with another pedal to save an outlet on your power supply.

The [one/fish] provides a very specific switching function, which may or may not be something you would use in your rig. However, if you do a lot of guitar changes and find that certain pedals always go with certain guitars, this would make the changeover a lot more painless. If you play in a band where guitarists swap lead and rhythm duties, and you have a different group of pedals for each, this would save a lot of fancy footwork during the changes.

The [two/fish] will likely be more useful to more players. If you group certain pedals together – all your time-based pedals, for example – and switch them all on and off at once, this will make that process easier. Having two channels gives the flexibility to have multiple sounds that are easily switched.

So – which one do you need? That depends a lot on you – you might need both! But whatever you decide, these two pedals (and the rest of the Fish Series, coming soon) will be a talking point on your pedal board, for sure!